Over the years as a home brewer I’ve tried to brew a number of different types of IPA’s, as I’m sure any hop loving home brewer has. Double, red, session, black, Brett and white iterations have all come and gone, but one of the few types I hadn’t tried brewing yet was a rye IPA (as well as a Belgian IPA). I’ve had a couple of commercial, and home brew examples that I’ve enjoyed but for some reason I’ve never gotten around to even writing a recipe for myself.

Recently I made another trip to Portland, Maine. One of the beer I happened to enjoy during my time there was Daymark by Rising Tide. It is a rye pale ale, light golden color, mild bitterness and light-medium hop aroma and flavor. Though I knew I didn’t want to brew a clone per se, it did inspire me to brew something along the same lines. Don’t get me wrong, it’s a great beer, but I wanted to bring the hop aroma and flavor up a few notches.

Which brings me to a question I find I’m asking myself more and more lately. Have I completely ruined myself for hoppy beer? By that I mean, if a beer I brew doesn’t have loads of hop aroma with citrus, tropical, fruit character (depending on what I’m brewing), I’m disappointed. If a beer I brew isn’t at least on the verge of being “juicy”, I’m disappointed. Yes I’ve read about the arguable “lupulin shift”, some say it applies only to bitterness tolerance, others to hops in general. I’m not sure if it’s an accurate idea and I’m certainly not looking to start a debate about the concept. I just know that since trying beers like The Substance by Bissell Brothers, or Scaled Up by Trillium, I want more from the hop forward styles I brew at home, and from other commercial examples.

So, like I said, as much as I enjoyed Daymark, I used it as inspiration for this beer instead of looking for a clone recipe. Luckily, I remembered a friend of mine did try to clone Daymark a few years back with this recipe. I came up with my own grain bill but decided to use his hop suggestions, though I did make increases simply because I find my beer to be less hoppy than his consistently. So the grist was fairly simple, 2-row for the base malt, rye malt (obviously), wheat malt for added mouth feel, acid malt for water chemistry adjustment, and finally rice hulls (rye can cause slow or stuck sparges). His recipe used Columbus and Centennial, I decided to use Chinook as well because I felt its citrus, pine, and spice character would go really well with this style.

It was nice brewing with these hops for a change. I tend to always chase the newest varieties, or at least as often as possible. Galaxy, Vic Secret, Kohatu, and so on. I really enjoy trying new hops and getting to experience what each variety has to offer. But, in doing that, the “classic” hops like those in this recipe can be over looked and honestly, under appreciated.

Here’s what I picked out of the BJCP for a rye IPA that I felt would work well and happened to be in my wheel house. Citrus and pine character with intense hop aroma, high hop flavor, medium-light body, and finishes dry. The style, of course, is much broader than that, but that is what I know I would like in a rye IPA.

I have a great amount of respect for the brewers, both home and commercial, that can nail down a beer perfectly within the BJCP guidelines of a specific style. This takes a great amount of experience and hard work. Not to just create a beer within said guidelines, but to make that beer outstanding. As much respect as I have for those brewers, I’m just not one of them. Aside from a number of Belgian styles, I don’t get too excited about guidelines, I tend to try to brew beer that I know I’ll enjoy, especially hop forward styles. On occasion though the BJCP guidelines seem to line up (for the most part) with what I’m interested in brewing.

Brewed by my son and I, mashed in with 11L, hitting mash temp of 150F. Mashed out with 6.2L, and finally batch sparged with 2.5 gallons of 170F water. 60 minute boil. OG five points high at 1.059, chilled to 60F and pitched re-hydrated pack of US05. Fermentation noticeable at 36 hours, and going strong at 48 hours. 1 ounce of chinook added on day 4 to primary. Second dry hop addition added on day 7. Day 12 beer transferred to CO2 flushed keg, keg hops added to weighted muslin bag. Force carbed in kegerator at 35psi for two days then reduced to serving pressure. 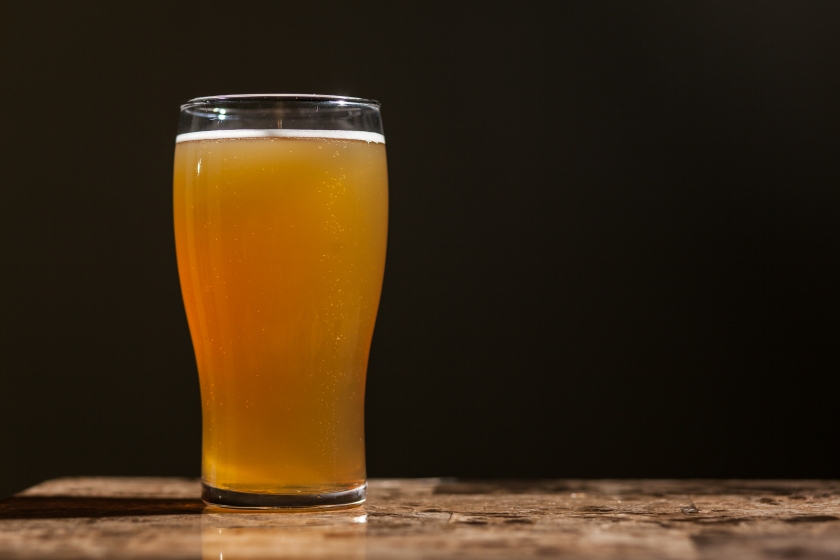 Overall: I like it, and it’s pretty close to what I had in mind when I was writing the recipe. I do think I’ll be sticking with a 10 minute hop addition again, I had dropped that in favor of a heavier flame out addition recently. I would like to try brewing this again with a Saison yeast strain. I think the citrus hops and spice from the rye would work well with wyeast 3711 French Saison. Until then, I’ll be chasing the next hoppy beer, something session strength coming soon.